Germany – A land known much for its brilliant innovations and gritty leaders! There’s hardly anything being spoken about Germany when it comes to Tourism. Germans are believed to be on the lower end of the friendly meter. Only hard core back packers include Germany in their Euro trip list or may be a town at the max for some others. With all these intuitions I happened to be in this western land. But it was just a matter of hours before my perspective would entirely change. Germany and Germans have a wonderful spirit of their own. Though I could visit only a couple of cities, few towns and get to know few Germans during my short stay, they all proved to have an equally indescribable charm.

I almost cart-wheeled in joy when I got to know that I would be travelling to Germany on an official trip! My employer had been kind to me for the second time this year. The plan was chalked. Official engagements scheduled, visa requirements done, Flights and trains booked, places to visit squeezed in, excel sheets, Euros and maps in hand and I was ready!  Met my friends, shopped as light as I could and got set! Emirates airlines gave my trip a thumping start, a complimentary upgrade to business class! As the Boeing777 screeched over the tarmac in Bangalore, my first ever foreign trip took off, in style! 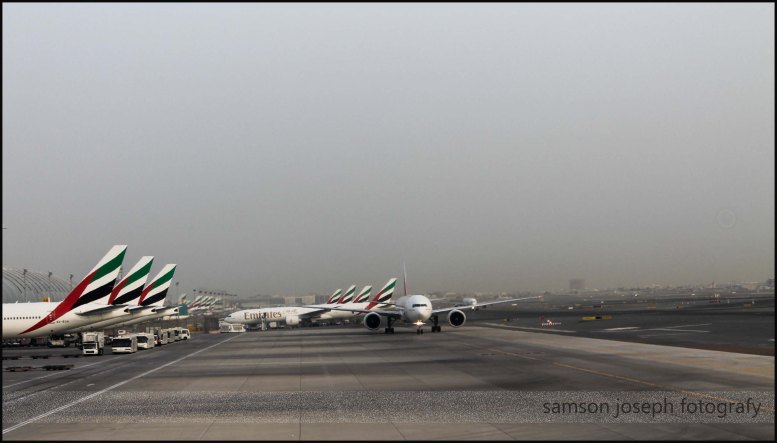 The stop over for change of flight would be at one of the most talked about destinations in the world, the quintessential Dubai! The aerial view of this sky scrapper city is probably out of comparison. The vast, blue sea seemed to have bowed in front this architectural giant. It is sheer brilliance to have raised a city this majestic out of desert on a coast and the Dubai International Airport happens to be just one of those countless structural wonders of this marvel city!, though it’s a wonder in itself! So Dubai, unofficially, will remain the first foreign country I ever visited!

An Indian meets a Pakistani over Turkey on an Arab flight with Germans around!

There were a lot of back packers on board from Dubai to Frankfurt. All of them probably returning after a gala time on the sun kissed beaches of Dubai. Emirates served some traditional Arab breakfast. Eating fruits and some sort of puddings while passing over Istanbul! 😉 It was during this leg of the flight I happened to meet a Pakistani guy travelling to Germany for his higher studies.  If an Indian and Pakistani have to start a talk their conversation should begin either with cricket or with Kashmir, in our case it was cricket! It began with the Indian Premier League (IPL) and then shifted to Pakistan players not allowed to take part in it and then moved on to the political rivalry and to national economy! Daily life is getting worse in our neighborhood. With prices soaring high above reach and constantly being acquitted by global countries of terrorism & violence, common Pakistani’s life is in shreds.  There was more than couple of things that I learnt about Pakistanis during this chat with him. They know about the IT in Bangalore, the education system in India, the Ammas & Didis, of course IPL’s new teams and above all it’s only the government that needs Kashmir & war, not the citizens! We parted when the flight was about to land and without introducing each other. The talk had begun when he asked me ‘aap India se ho?’(Are you from India?)! So I remained the Indian and him the Pakistani! 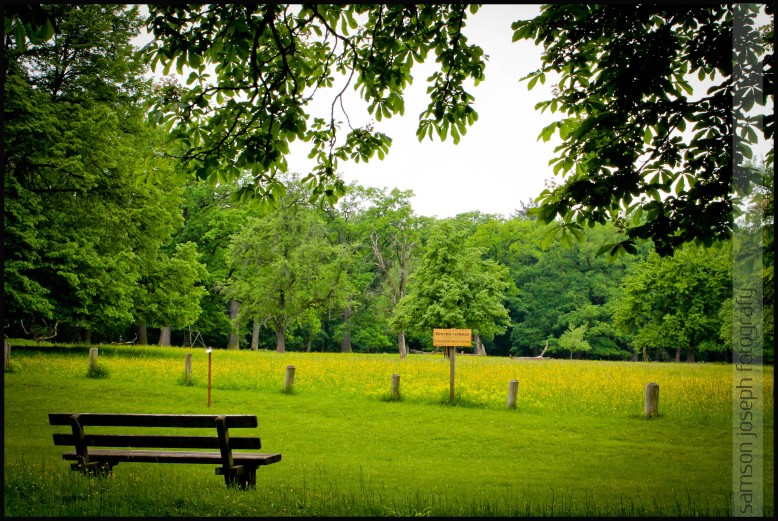 The man I met on the Bahn!

I was at the Frankfurt train station waiting for my train to Stuttgart. The tube station is so perfectly located that you don’t even have to step out of the airport to get into the train! There is a two-couch automatic train that connects the terminal 1 with railway station, passing over the airport offering a splendid view of the run way and flights. The trains are crisp on time here! You really don’t have to check if it’s the right train you are boarding. If it has to be at 5:13pm then it will be on the platform at 5:13pm. 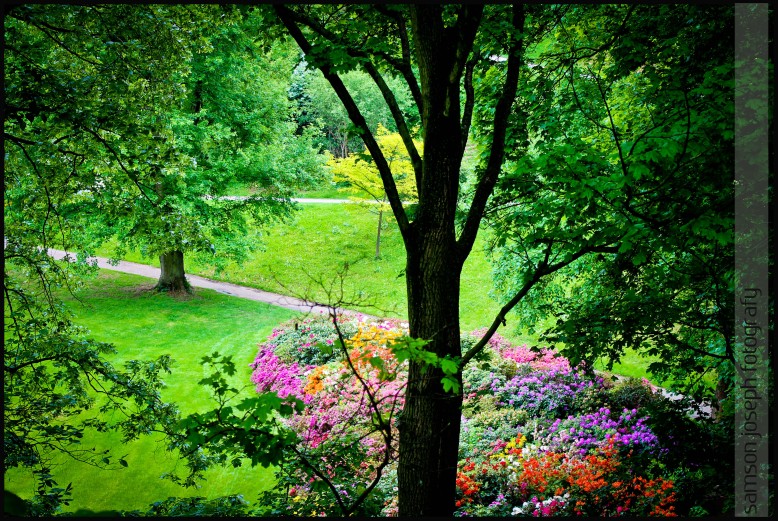 The colors of Ludwigsburg. A small garden at the palace.

The trains are an entirely different world, at least to me it seemed! It’s more like a living space. The second class reservation compartments had facing seats with a wooden table in between, fixed to the side, making it look like a moving restaurant. The train also has a cafeteria at the junction of the first and second class compartments. From the comforts of your first class seats you can even order a coffee or beer that will be served instantly. I had the reservation for a middle seat. Yes, not the most desirable one if you would want to see outside the speeding train through the huge screen like windows. But I had no choice as the train was fully occupied. I kept looking out of the window pane as the train cruised through lush green fields and scenic roads. The landscapes on both sides looked like a perfectly rolled lawn. There was an old gentleman to my left by the window side, busy on his laptop. I think he must have noticed me craning over and around him to get a view. This person immediately asked me if this was my first time in Germany, I promptly nodded. To my surprise, he asked me to exchange seats with him and move to the window and to more surprise, he closed his laptop and started explaining me about the places as we cruised through. The historic, beautiful city of Mannheim, River Neckar, Tile roofed houses, lush green fields everything zipped past as the small digital display screen near the door showed the speed, 235kmph! Not a common sight, at least for me! It took one hour and eight minutes for a journey of about 210 kms! A journey first of its sort to reach another bubbling destination, the city where the cars took birth, Stuttgart!

Monrepos – The lake side palace

I sincerely admire the Germans’ love for their language. If you are in Germany and don’t know basic German then you are in trouble without doubt. They hardly have any signboards or instructions translated in English apart in big cities; luckily they don’t have a script of their own and is written in English alphabets. You would see a door written Ausgang or Drucken even in an International airport! That’s not a Drunken Mustang but Exit and Push! You may find a pedestrian well versed with the place you are talking about and nodding his head but all that he can reply is ‘Aai Noow Englisch!’ You might pick a very good looking catalogue at a castle with some mesmerizing pictures, wanting to dig into history of the place that you are visiting you open it but only to find all that’s written is German. You go to a restaurant, take a look at the menu, a dish with name ‘Pommes’ sounds delicious and authentic but to your surprise what the waiter brings is a plate of French fries! Pomm! Pomm! 😛 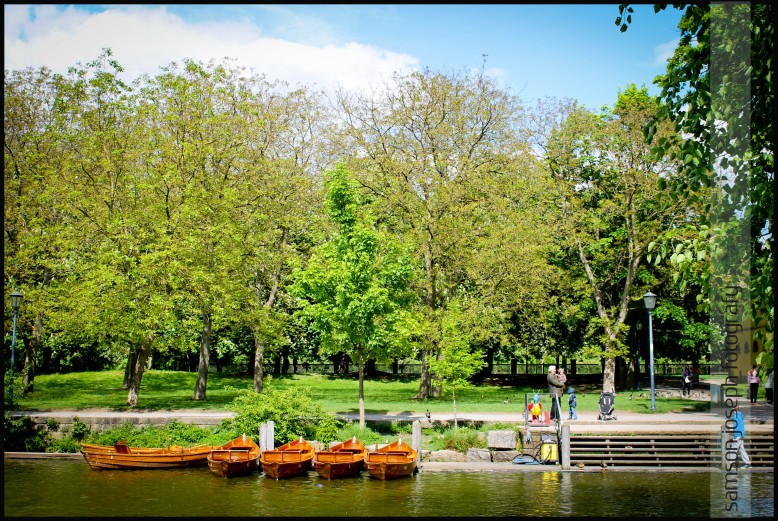 Boats await tourists at the lake in front of Monrepos.

Worst was when I visited the Monrepos or Lake side castle in Ludwigsburg. I had drained few extra beers when I arrived at this place and had to use the loo at any cost. I wasn’t really surprised to find loo doors written ‘Damen’ and ‘Herren’ and nothing apart from it, not even a picture! The beer and the urge made my brain work at the speed of bahns! Da-Men, MEN! This should be Men and Her-ren, HER! Yayy!! This should be Women! I did it; wearing an ‘I am awesome’ looking smile on my face, I walked towards the Da-Men door! When you are in Rome and if you aren’t doing as the Romans then you are bound to get odd stares! The law applies even outside Rome. To my blessing (?) came a lady out of this door written ‘Damen’ and gave me that odd stare! Yes, Damen is for women and Herren is for Men! Huh!  It’s such a task deciphering this language, trust me! They don’t even have their language peppered with stylish English words if you are thinking to catch on! But I totally loved the feel of a foreigner and the sounds of long, German words! Being lost amidst Straβes and Bahnhofs! Tschuss and Chao with only hand signs and gestures for my rescue! And if you aren’t as crazy as me then I would suggest a basic German – English dictionary even for a two day visit to Deutschland!

2 thoughts on “Deutsch Connection – I”