The last day in Cornwall began with a full English breakfast in Penzanance. Another drive along the narrow roads of this beautiful county, we were becoming part of the ‘good weather’ hunting crowd flowing to St. Ives. The town was madly crowded on the beautiful sunny day and it took us really a while of driving, on the roads that were more narrow and filled with people, to find the parking. Finally few hundred meters away from the beach, over a hill, that my poor car struggled and burnt some clutch plate to climb! We were finally in one of the favourite English beaches, ‘Best UK Seaside Town’  award winner of 2010 & 2011, St. Ives of Cornwall.

St.Ives is a seaside town on the Western coast of England on the shores of the Celtic Sea. Being one of the warmest towns in UK and Northern Europe makes it a busy holiday destination. The town has four beaches: Porthmeor a surfing beach, Porthgwidden a small sandy cove, Harbour by the working port and Porthminster which has almost half a mile of sand. We chose to spend a long time soaking up the warmth that had become so unusual for me in this country. There were surfers and gliders enjoying the high waves of this beautiful cove and time flew past as we enjoyed that warm sunny day, sand and blue waters of St. Ives.

It was well past afternoon as we started to our final point on the way back home. We were yet again at the risk of turning up at closed gates and the narrow roads meant, I could only be at a limited speed. We made it in couple of hours to the little village of Tintagel. The sun was setting soon and it would be dark in an hour’s time but we were lucky. Though the main castle island would be closed, we could still walk around the cliffs and enjoy the view. Its a short ten minute walk from the Tintagel parking area and you are suddenly walking in between two little hills. The one on the left takes you to the very castle that we came for, King Arthur’s Tintagel Castle and on the right hill a hotel that was built in 1899, now called the Camelot Castle Hotel. 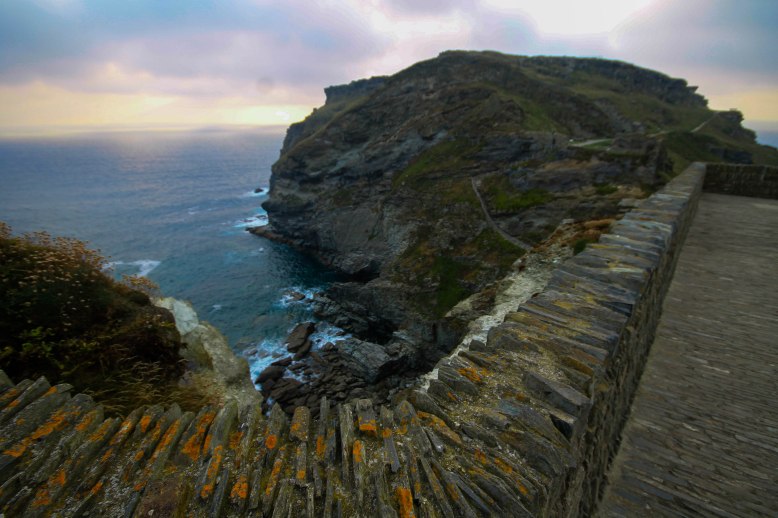 It was a charming evening that would last in me for some time to come. Setting sun painting the hues on the blue water and the white foaming waves crashing onto the black, shiny rocks. On top of it all sat the once mighty Tintagel Castle. Of all the wonderful history this island country has to offer, Tintagel has one of the fairy tale bests of all. The legend says, King Arthur’s father, the king of all Britain, Uther Pendragon, was in love with Igraine, the wife of Gorlois – Duke of Cornwall. Gorlois sends Igraine to stay safe within Tintagel Castle, which is supposedly his most secure refuge. King Uther Pendragon tells his friend how he loves Igraine, but his friend replies that it would be impossible to take Tintagel, for “it is right by the sea, and surrounded by the sea on all sides; and there is no other way into it, except that provided by a narrow rocky passage—and there, three armed warriors could forbid all entry, even if you took up your stand with the whole of Britain behind you”. Geoffrey of Monmouth’s story goes on to explain how the wizard Merlin was summoned, and in order to help get them into Tintagel Castle, he magically changed Uther’s appearance to that of Gorlois. Disguised thus, they are able to enter Tintagel, where Uther goes to Igraine, and “in that night was the most famous of men, Arthur, conceived.”

We were almost at the last leg of our coastal drive and the drive back on Atlantic Highway was like a fitting curtains. The stretch of A39 Atlantic Highway between Newquay in Cornwall and Barnstaple in Devon is termed to be one of the most scenic drives in UK and one of of the top 20 in the world. Now, I knew why.  This is the one of those drives where you should ignore your map/satnav and concentrate on stupendous views instead. While the road dips and raises every few hundred meters, on one side of the road are increasingly wild hills; and on the other, some of Britain’s best coastline and for a trip that was planned to savour the best of English Coastline couldn’t have ended better.

4 thoughts on “Devon – Legends of the Atlantic coast”